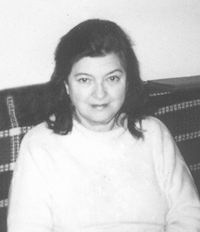 Zlata Tcaci was born in the village of Lozova, Nisporeni, in the family of violinist, conductor and pedagogue Moise Berihma. The first lessons of music were taken at the age of three.

She continued with four classes at primary school and two classes at the Regina Maria High School in Chisinau. At the age of thirteen (1941), during the Second World War, she was at a children’s home in Namangan, Uzbekistan. There she organizes an ensemble of children and makes the first attempts in composition.

In 1945 she returned to Chisinau. After graduating with mention of the middle school she enrolled at the State University of Chisinau, Faculty of Physics and Mathematics, which she abandoned, to study at the State Conservatory Gavriil Musicescu (nowadays the Academy of Music) . In 1947 she continued her studies at the Conservatory. After graduating from the Conservatory in 1953, the Musicology Department, she became a music theory teacher at Ştefan Neaga Music School (today Ştefan Neaga Music College) in Chisinau, where she worked until 1963. Afterwards, she left her activity at the Music Academy Gavriil Musicescu. In 1962 she became a member of the Union of Composers of Moldova and from 1973 – member of the leading committee of the Union of Composers of Moldova.

She makes her debut in 1953 with a song for children “I have no time to bore”, for vocals and piano, lyrics by G. Perov. In 1957, the first great work – the song of the “Nistru Song” appeared , lyrics by Emil Loteanu.

In our country Zlata Tcaci is the author of the first methodological treatises in the field: The Coral Arrangement Method and the Collection of Polyphonic Dictionaries; signs works of “didactic genres” for the initiation and training of children; materials for music books; repertoire pieces and collections for music school students, including the Concerto for the Violin School.

In 1974 Zlata Tcaci is awarded the Honorary Title of the Emeritus Master of Art in the MSSR, the State Prize of MSSR (1982), and in 1998 the Gloria of Labor Order.