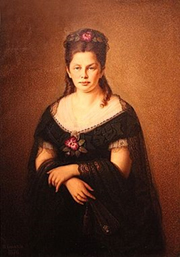 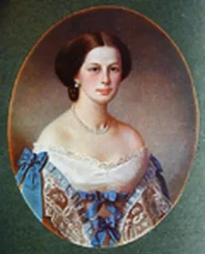 She was descended from the famous and wealthy noble family Dyagilev. She was born on April 5, 1837 in Perm, and was the eldest of the nine children of the family. As a child, she enjoyed freedom, she was cheerful and rebellious. For this reason she had a complicated relationship with her parents. Like all her brothers and sisters, she received a very good home education.[1] In 1856 she married Vladimir Filosofov, a prominent statesman, a military prosecutor, a man with liberal views, who made Anna Filosofova develop an interest in public activity. Her husband participated actively in the government reforms in the 1860s and he supported her in all her enterprises. They were a unanimous couple who worked together for the liberal change in Russia.

Filosofova was one of the first beauties of St. Petersburg and belonged to the Higher St. Petersburg Society. In 1859 she met Trubnikova and Stasova, and this determined her life further on and their new common work. What helped her with this work were her numerous acquaintances, her connections in the palace and the high government circles, her husband’s high position, her personal charm, beauty and youth. “To organize an evening, a charity bazaar, a concert, a lottery, the funds from which would go for ‘women’s matters’, to obtain permission for these events – there was no one better than Anna Filosofova who could do it. She actively used her relationships and connections. In her youth she used her beauty and youth; once she addressed the Minister of  Education, Count Tolstoy, on the issue of establishing the statutes of the higher women’s courses during a ball while dancing. Over the years, she began to use the resource of her age. Thus, in 1905, she wrote to Mayor D. T. Trepov: “Today I have a talk before the members of our Society[2] but three days ago, in our Society a guardian came and insisted that our chairman Anna Shabanova should tell me that you forbid me to read the lecture and you forbid to have an evening gathering. Dmitriy Fedorovich, I do not believe that you can consciously insult a 70-year-old woman, whom your father respected very much. So I decided to write you this note and to ask you to explain the whole situation. Shabanova and I have always acted legally in everything. and that is why your distrust and disrespect to us strike us, which is something we do not deserve.”[3]

From a personal perspective, her marriage was very happy and she had 9 children, two of them from her husband’s previous marriage. Her husband supported her in all enterprises, although his duties as a Chief Prosecutor often contradicted her activities.[4]

Ariadna Tyrkova claimed that her name was as well-known in Russia as Leo Tolstoy’s name. Together with Nadezhda Stasova, they gave the women of the 1890s ideas and experience acquired in the 1860s. In the last years of her life there were no participants from her generation in the movement. She was the only one of the “triumvirate” who lived in the 20th century and became a symbol of the movement and she participated in its activities to the end of her days.[5]

Anna Pavlovna also participated in the international women’s movement. From 1899 she was the vice chairman of the International Women’s Council. In 1902 she gave the idea of ​​conducting the first All-Russian Women’s Congress that aimed to unite women for further fighting for their rights. She became the chairman of the congress.