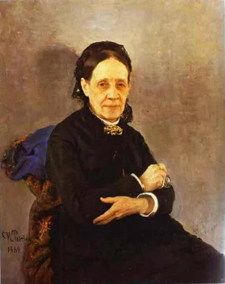 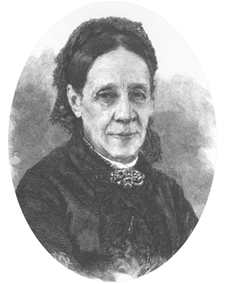 Nadezhda Vasilyevna was the daughter of a dvoryan architect. She was born in the palace in Tsarsko Selo and her godmother was Empress Elizaveta Alekseevna, wife of Alexander I. Since she was a child she was surrounded by books and works of art. According to the memories of her brother Vladimir, with whom she was very close, his sisters “considered it a great insult to themselves and blood injustice that their brothers were educated and taught quite differently from them and they thought they could also learn everything that their brothers learned. [1]

Poliksena Stasova, who later married her brother Vladimir, said about her:

“I met her in the autumn of 1859 in the Clark family, who were relatives of the wife of her eldest brother, Nikolai Vasilievich, at the so-called Cast Iron Plant, where Clark lived in their old English home. I had been awaiting this acquaintance with some trepidation. I was a young, shy girl, and one of Clark’s sisters had whispered to me that  Nadezhda Vasilievna was an extraordinary person. And when I walked into the living room, a slender, short and not a young girl in a black cotton dress with a white collar and cuffs, smoothly trimmed, stood up from the couch. This girl came to me and told me without any unnecessary words: “Hello”, as if we had known each other for a long time, stretched a small, exquisitely beautiful white hand to me, in the other hand she was holding a golden lorgnette. What struck me and made me interested was this kind of somewhat simple and somewhat harsh addressing to me. This time I could not talk to Nadezhda Vasilievna, but she invited me to their place and I was very happy – I was attracted to her by some strange power … At that time she lived with her four brothers and the family of her eldest brother in a large house, where strict orderliness and a serious artistic taste were obvious. A beautiful portrait of their father hung on the wall … At this point in her life, Nadezhda Vasilievna had dedicated herself to her family: she led the big, complicated household, helped her daughter-in-law to raise up the children, educated another niece – an orphan, and she dealt with the children as a mother. I repeatedly found her during a lesson of history or geography with the elder children, or a music lesson, or just when she played with her little nephews … In her spare hours, she painted a lot and she painted exquisitely. As a matter of fact, she painted all her life. Among the most complex and important activities of her courses, she had time to paint … According to her every labour, both small and big, was useful and needed.”[2]

The Stasovs were known for their education, intelligence, and liberal beliefs. All family members were public figures. Dimitar Stasov was a prominent lawyer, a defender of many political processes since the 1870s, for example, in the case of Karakozov, one of the organizers of the Russian Musical Society and the founder of the St. Petersburg Conservatory. The other brother Vladimir Stasov was a music and art critic, art historian, archivist and collector. [3]

In the evening Nadezhda liked to play the piano four hands. Her favorite piece was Mozart’s Requiem. I used to go to their home in those evenings when her brother, Dmitrii Vasilievich gathered the “Legal Society” that they had founded to prepare young lawyers for the judiciary reform. While there was a lot of debate in his office, Nadezhda and I played the Requiem… We soon became friends, we would read a lot together, she loved me because of the “hot wind” – as she used to say, and I attached to her with all the power of my soul. Disregarding the big difference in our age, I felt so good, as if I had lived with her for 100 years, and as if there was not time when I did not know her…  Sometimes she invited me to concerts at the Russian Musical Society and she always invited me in the kindest and most playful way. ‘It is an honour for me, and so on and so forth’ N. Stasova.“[4]

At the end of the 1850s, there appeared new trends from everywhere … the everyday  public life entered a new age. An unusual growth  began in all intelligent strata, and a voice  within us, the women,  spoke articulately that only the family side of life was not enough, that something had to be done for the public and for the people’s welfare…

Nadezhda Stasova started her active social work in adulthood. When she met Maria Trubnikova, she was 36 years old and it was 1858.

Suddenly, in the autumn of 1860, the news that Sunday schools were established came. The burning spark ignited in the hearts of many women, and this was how the first way to the pursuit of labour for the benefit of society and getting closer to the people was found. Sunday schools were opened in every corner of St. Petersburg. One of the first was the school on the corner of Gradinarska street and Inzhenerna Street, now the Red Cross building is there. At first it was a men’s school, and then in the same building a women’s school was founded. There was a workshop at the Women’s Sunday School. In this school Nadezhda Vasilievna and I took part. The work was fascinating, wonderful. It was not literacy the most important thing, but the communication of girls with girls – students in all sorts of workshops. We immediately had a warm, close relationship with the students. They treated us as their friends and shared their sorrows and joys with us. But the joys were scarce. Their lives were full of all sorts of deprivation – material and moral.[5]

All this poverty of the girls made Vasilievna think of a whole programme for future activity and to implement it in the “The Society of Cheap Lodgings”. All our best collaborators grouped around it. On Sunday evenings, a lot of guests were welcomed in the cozy sitting room of Stahovs. Nadezhda always served the tea herself at the long table around which there was a lively and varied talk. … Together with the activity of preparing the lessons and reading in school, another job appeared: visits to the Second High School meetings, especially for exchange of practical observations among teachers in various Sunday schools, in order to elaborate a common programme. Each school had a representative and our school chose Nadezhda Stasova … The summer of 1861 she lived in their villa in Peterhof. In the autumn of 1861 the fate made me even closer to Nadezhda Vasilievna – I became member of her family. On the day of my wedding, she called me by my first name and from that day on  she was my eternally loyal companion … Since that autumn, N. V. began her work in the “Society of Cheap Lodgings”, and when in 1862 our loved school was closed, she devoted herself to the new job so warmly and selflessly the way she had previously been dvoted to the Sunday school.[6]

In 1864, the first nursaries for the working class children were opened where Nadezhda Stasova took very active participation almost to her death. [7]

Here is what Nadezhda Vasilievna said about herself in this period: “I looked around and all my love, which I had brought from my family, I brought to society now. Whatever happens, everything will go better. To me the charm of my own family disappeared, and I felt love for the whole world, it has become my job and I will die with it.” [8]

It happened so. According to the words of her loved ones, she was generously devoted to the common cause, giving all her strength and her health. And the cause – this was above all the women’s issue, the women’s movement, one of its leaders became Nadezhda Vasilievna. The purpose of the movement was to help other women, to catch up with men in the right of training, labour, and to receive education, including higher education, to find their place in life, to become useful to society, gain self-reliance in the family and out of it. These were Stasova’s goals, but above all self-education: books, lectures at the University, and after the ban, it was in the form of the Bestuzhev courses, for which Stasova was one of the initiators.

Further on in Poliksena Stasova’s memoirs an article by Menzhinskaya  was quoted on the occasion of the death of “the two most prominent and energetic Russian women, it was always both of them, because their work is so intertwined that it is impossible to separate them – Maria Trubnikona and Nadezhda Stasova. The memory of the two friends and their social activity that is important as an example that influences in a cheerful way on young women making them to do something for the society, to apply their knowledge and strength to raise the level of the work of the women’s education and work .” [9]

“In 1861 Nadezhda Vasilievna joined the “Society of Cheap Lodgings” when a chairwoman was Maria Trubnikova. Here is what the secretary of the committee at that time, Evgenii Shakeev, who often accompanied her during her visits to the poor, said about her: ‘Nadezhda Vassilievna possessed on a high spiritual level this  tact of the soul, which is so needed in charity, so that it does not turn into intolerant and abusive throwing of things. Entering the poor’s homes, she could carefully and at the same time completely intimately ask  questions about the situation of the family to clear out in a non-offensive manner the causes of the poverty, so that after her first words the embarrassment that naturally occurs in many people who are intelligent but at the same time are under the pressure of the circumstances,  disappears.”[10]

Elena Schtakenshneider, a memoirist and landlady of a literary salon in St. Petersburg, wrote in her diary in October 1868: “When I met Nadezhda Vasilievna and I once again came into the world of work and labour, I felt terribly bad and shameful because of the wasted summers and the missed winter. .. And Nadezhda Vasilievna? With angina, high temperature, tears in her eyes, hands like ice, so weak that she barely moves her feet, almost without a voice due to the weakness, all day working, helping.”[11]