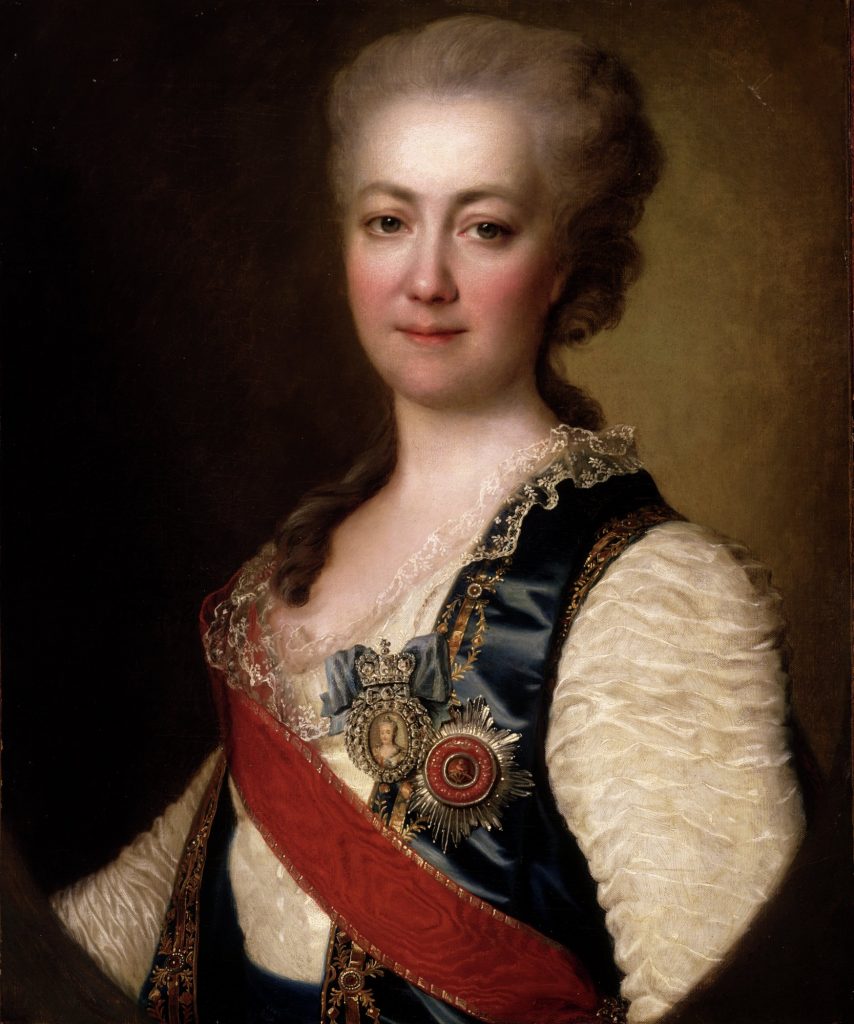 Princess Dashkova’s Memoirs make it possible to follow the important events in her life from her personal perspective. Ekaterina Romanovna Vorontsova was born on 17 March 1743 in St. Petersburg in the family of Count Roman Ilarionovich Vorontsov. At the age of two, she lost her mother and at the age of four she was sent to her uncle’s home – Chancellor Mikhail Ilarionovich Vorontsov where she was brought up. For that time she had superb education provided at home: four foreign languages, music and painting; she herself acquired basic knowledge of the humanities and the natural sciences. Dashkova’s intellectual development was due not only to the rich library of her uncle, but also to the talks with dignitaries of the empire and foreign ambassadors who were guests at her uncle’s home. A sudden illness made her spend a few months alone in a village, and the books were her only company; her passion to reading remained for the rest of her life. She was strongly attracted by the writings of the great Enlightenment representatives: Bayle, Montesquieu, Boileau and Voltaire became her favorite authors. Dashkova was interested in politics from an early age and she had a wish to play an important historical role. In 1758, when she was only 15 years old, she met the Great Princess Catherine, the future Empress Catherine II and she was enchanted by her will and intellect; she respected her all her life despite the changes in the Empress’s attitude towards her. The future Empress immediately assessed Ekaterina Romanovna’s original mind and education. The fate gave Dashkova a chance to play a historical role early. In 1761, when Peter III was crowned, a narrow-minded man with the mentality of a military man according to her, whose role model was the Prussian King Friedrich II, his wife, the Great Princess Ekaterina Alexeyevna planned a coup d’état and chose for her allies Ekaterina Romanovna, who would promulgate her among the courtyard circles, and Grigoriy Orlov, who promulgated her among the military men. After the coup, contrary to the expectations of Ekaterina Romanovna, other people were chosen by the Empress to play a leading role in the court and state affairs, and with bitterness she had to recall Peter III’s words, “My Child, he said, it will not do you a harm to remember that to have a relationship with honest simpletons like me and your sister is much safer than with such great wise people who will squeeze the orange juice and will throw the peels under their feet” (Dashkova 2003: 14). The young, craving for feats Ekaterina Romanovna devoted herself to the conspiracy fervently. However, what she obtained at the coronation ceremony was the humiliating place at the back, together with the wives of colonels. In her imagination she may have exaggerated her involvement in the coup, and Catherine, whose friendship was unlikely to be so sincere, denied the prince’s significant role in its success.

In 1758, by chance Ekaterina Romanovna met Prince Mikhail Dashkov, they both fell in love at first sight and she dedicated her life to marriage completely. After their wedding in the same year, they went to Moscow to her husband’s family, and to make them like her, Princess Dashkova started to study the Russian language, which she hardly knew until the age of sixteen. One year later, their daughter Anastasia was born, and then – a son Mikhail. In 1761 the Dashkovs returned to St. Petersburg. As a sign of gratitude, the Empress gave her the title “stats-dama”, the Order “St. Catherine” and a sum of money as a reward. However, Dashkova had expected far more; she had hoped to build a new Russia together with the enlightened Empress, in which the imperial power would be based not on arbitrariness, but on the laws and reason. Nevertheless, this place was taken by Grigoriy Orlov, a lover of Catherine II. Having grown up with a sense of justice and principles, Dashkova wrote that she did not accept favouritism in politics, especially from an enlightened empress, but life appeared more complex than the Enlightenment ideals. The despotic Empress would hardly share her unlimited power for her literary and philosophical inclinations. During the coronation celebrations, their younger son Mikhail died. In the summer of 1763 Dashkova was suspected to have been involved in the plot of F. Hitrovo, which annoyed the Empress again. In 1763, her son Pavel was born. The family happiness lasted for a short period of time; in 1764, during the Polish march, her husband Mikhail Dashkov died. Ekaterina Dashkova put all her efforts in the education of her two children following the principles of the Enlightenment. With rather strict family expenditure she paid her husband’s debts and improved her estate in Troitskoe; then she asked Catherine II to allow her to travel abroad. In 1769, Ekaterina Romanovna and her children headed for Europe under the name of Mrs. Mikhalkova in order to avoid unnecessary expenses and ceremonies. With great interest, she became acquainted with the European universities, academies, museums and theaters. She met Diderot and Voltaire, she investigated the opportunities for her son’s education. In Europe she was honoured as a companion to the enlightened Empress of Russia. In 1772 Ekaterina Dashkova returned to Russia.

The Empress invited her to stay in Tsarsko Selo and her son Pavel Dashkov at the age of 9 was enrolled in military service and appointed as a carnet. Dashkova received a huge amount of money as a gift. Again she was accused of being involved in a fabricated plot in favor of the heir to the throne Pavel Petrovich. In 1775, Ekaterina Dashkova and her children went on a second trip abroad under her own name. She prepared her thirteen-year old son’s admission at one of Europe’s oldest universities –  Edinburgh university. He showed brilliant knowledge and abilities at the examinations, and the princess herself prepared his curriculum. She felt wonderful in the society of English intellectuals and remained an Anglophile for the rest of her life. In 1779 Pavel Dashkov graduated from Edinburgh University brilliantly, but the princess was in no hurry; she wanted to show her son the enlightened Europe, and for three years they travelled around Europe with a rich cultural programme and receptions at the English, French and Austrian courts. In 1782 Ekaterina Dashkova returned to St. Petersburg and with the assistance of the new favourite of the Empress, Prince Potemkin, Dashkov was appointed as his adjutant and as captain lieutenant in the Royal Guard. Ekaterina Romanovna had problems with her daughter, whose wasteful and revolting attitude towards her own mother made her life bitter. Her son also disappointed her with his unequal marriage: he secretly married a wealthy merchant’s daughter without the blessing of his mother. Her relief was her warmed relationship with the Empress, who gave her a mansion and unexpectedly offered her to become the head of the Academy of Sciences. By a decree of the Empress on January 24, 1783 Dashkova was appointed director of the St. Petersburg Imperial Academy of Sciences. The enormous knowledge and energy of the princess finally found a way to emerge. For 11 years she would direct the science in the vast empire. After she put in order the financial affairs of the academy, she provided the necessary conditions for calm and beneficial work for the academics; she organized expeditions, opened laboratories, modernized the topography, restored the botanical garden and built a new edifice for the academy. It was Dashkova’s idea to open the Russian Academy with a humanitarian national profile. She became its first president. Wholeheartedly she initiated the revival of the Russian thought and spirituality, of the Russian language and its highly deserved respect, the purification of the language from unnecessary borrowings and literary deviations. In 1794 the princess asked for a two-year leave due to health problems. The real reason was the deterioration of her relations with the Empress because of doubts concerning the Academy’s commitment to Aleksandar Radishtev’s book “A Trip from St. Petersburg to Moscow”, in which he criticized harshly the existing social order in Russia and its serfdom. Radishtev was also a friend of her beloved brother, Alexander Vorontsov, who continued to support him in the years of exile. The other reason was the publication of Yakov Knyazhin’s tragedy ‘Vadim the Bold’ in the edition of the Academy “Russian Theater”, in which Republican ideas were noticed. What did irritate the Empress was Benjamin Franklin’s attitude of praise to Radishtev’s book. Despite her enlightenment enthusiasm, the Empress did not tolerate a hint of criticism regarding her absolute power, and the publication was confiscated. After the death of Catherine II, the princess fell into disgrace with the new Emperor Paul I and she was sent to her son’s estate in Kurtovo to recall her participation in the coup. She stoically suffered all the deprivation and managed to receive permission to move to her favorite mansion in Troitskoe. After Paul I’s death in 1801, Catherine II’s beloved grandson, Alexander I, completely rehabilitated the princess; she was invited back to the court. The old princess spent the rest of her life in Moscow and Troitskoe; she devoted her time to doing repairing works to her estate, dealing with with music and painting and collaborating with some journals. She fully dedicated to her friendship with the two sisters, Martha and Catherine Wilmot, whose families she had met during her stay in Great Britain and who arrived in Russia in 1803. Martha Wilmot, who lived with her for 5 years, requested her to write her “Memoirs”, which had a great historical value and were among the first memoirs of the late 18th and early 19th century. They were originally published in English in 1840 by Mrs. Wilmot. In 1807 Dashkova’s son Pavel Dashkov died at the age of 43. The princess felt so ill that she could not even go to the funeral where her daughter Anastasia Shterbinina made an indecent scandal as a result of which Dashkova deprived her of inheritance. On January 4, 1810 in Moscow, Ekaterina Dashkova died and was buried in her favourite mansion.