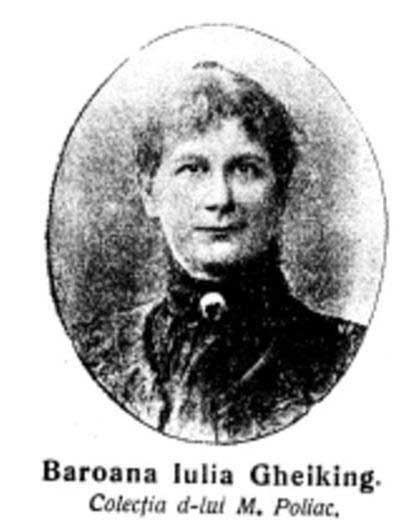 Is finishing studies at the Institute of Noble Girls in Smolnai city in 1876. In 1892 (under the patronage of king’s sister – Xenia Alexandrovna), at the age of ten and after the death of her father, opens a kindergarten in the house of the noble Ilie Feodosiu. At that time, the decision was a pioneer one, a unique pedagogical experience, but her education gained at Smolnai, permits her to convince the conservatory society of Chisinau, that here kids should have the same possibility to be educated and raised together.

The kindergarten continued to work as a mixed gender one, accepting children from the age of 5. In 1913, Cheiching is transforming this institution in a lyceum for girls (a unique kind of lyceum at that times in Chisinau), it received her name and was active until 1931. The lyceum building was leased by Victor I. Shmitov in 1914, whose wife Olga, sister of Iulia, was a teacher of painting in the lyceum.
Iulia Gheiching being the director of the lyceum, was at the same time a teacher of calligraphy, French and German languages.