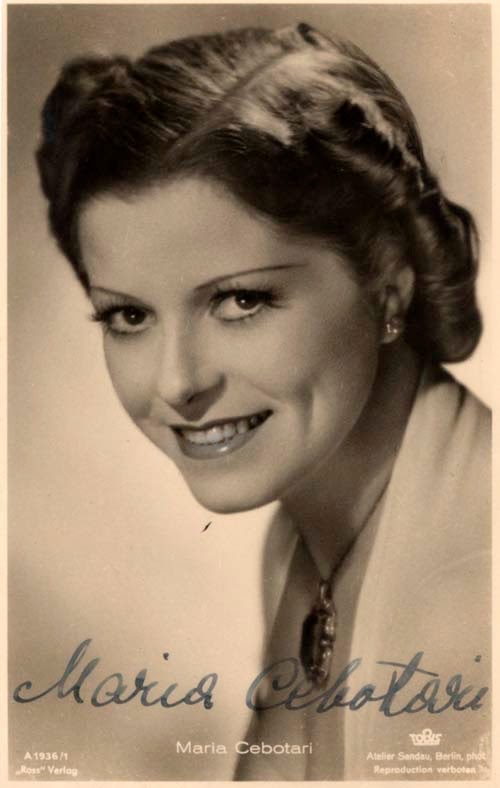 She studies at the normal girls’ school Florica Niţă and at the Chişinău metropolitan chapel headed by Mihail Berezovschi, followed by the Conservatory “Unirea” in Chişinău (1924-1929).

In 1926, she is discovered by Count Alexander Virubov, the former director of the Moscow Artistic Theater. Together with the Russian theater, she also gives performances in Bucharest, after which she goes to Paris to play on the great scenes from there.

In 1929 she went to Berlin, where she took singing lessons. Being in Berlin, Maria takes music lessons. Shortly after, she learned German so well that she could take a piece of evidence to the director of the Dresden State Opera, conductor Fritz Busch. Impressed by her voice, he offers a contract on the spot, and on April 15, 1931, Maria begins with the role of Mimi in La Bohème by Giacomo Puccini.

The song was a huge success, and the performance was so good that it seemed to have been written for her.

Then she finds out that is seriously ill and will die. The news of death tears applause from the audience, being called several times in the scene for the ovations.

At the Dresden State Opera she remained soloist until 1943; between 1935 and 1943 she performed on the stage of the Berlin State Opera. She was later employed as a permanent soloist at the Vienna State Opera, where she remained until her death.

After this play, Maria Cebotari enjoyed a great success and collaborated with the Berlin Opera, where she played in La Bohème and Madame Butterfly. Shortly after, she became known all over Europe, playing Mozart, Tchaikovsky or Verdi.

At only 24, Maria Cebotari is awarded the highest honorary title in Germany and Austria since then – by Kammersängerin.

She starred in eight films, casts in Germany and Austria, alongside the stars of the cinema at that time, including her husband, Gustav Diessl.

In 1936, she also starred in the film, playing in the musical “Mädchen in Weiß”, followed by several films.

In 1937, while casting the film “Starke Herzen im Sturm”, she meets the actor Gustav Diessl, whom she falls in love  and with whom she marries.

She was buried alongside her husband, Gustav Diessl, aged 39 in the Döblinger cemetery in Vienna.