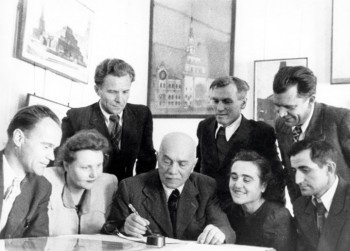 In 1925, she graduated from the Higher School of Architecture in Bucharest. From 1932, she worked in Balti, where she was the only architect with the necessary training. For the headquarter of the city hall she restored the interior of Makarov’s house, rebuilt the house of Katarji-Bodesku in 1934 for the seat of the Tribunal.

During this period, Rozalia Spirer elaborated the projects of the “Ion Creanga” school for boys and “Elena Principesa”, for girls, in modernist style (1938, now the rectorate of Aleco Russo University in Balti), as well as the Industrial Highschool of girls, houses on Stefan cel Mare street, 79, and Hotin Street, 26, City Hall headquarter (now “Balteanca” shop).

During the Second World War, Rozalia Spirer was evacuated in the Saratov region, then at Fergana. He returned to Chisinau in 1944.

For many decades, Rozalia Spirer has worked in the Department of Architecture and Construction of the Design Institute “Moldgiprostroi”. In the early 1970s, she dealt with the design of multi-storied reinforced concrete blocks using sliding formwork techniques. The first block of this type in Chisinau, a nine-storey house, was built on Negruzzi Boulevard. This block was her last project before retirement in 1972.