Skip to content
Home »19 Century»Women and Education»Emerging female participation in the public sphere: first women schools, female high schools, access to university: the presentation of the female teacher in the 19 century (Bulgaria)

The first evidences of Bulgarian female education are from the end of the 18th – early 19th century, when the idea still had no social support. At that time, the girls were trained by nuns in few monasteries. (Anastassia Dimitrova)

Only in 1841, in occasion of the appearance of the first male schools, a secular primary girls’school was opened in Pleven. It was created by Agathius the Bishop of Vratsa and his mother Eugenia, Greeks by origin. Its development was a result of the efforts of the teacher Anastassia Dimitrova.

In 1841-1856, another 35 primary girls’schools were opened in small and bigger towns, mostly in the Balkan Mountains. They used Belle-Lancaster’s methodology, had had few teachers and no curricula. However, they accelerated literacy, educating female teachers and covering part of the female population. As a result, women’s literacy in cities and villages was grown up to resp. 2% and 0.1%.

The opening of the Shumen elementary school in 1856 marks the beginning of the secondary female education. In the 1860s-1870s, more subjects and secular knowledge were taught in these schools, the primary school teachers were trained, and graduates were motivated to study in secondary and higher schools. However, the number of female schools – 100 – was incomparable to that of boys and was negligible in terms of the number of female population.

Until 1878, 113 Bulgarian women studied in foreign high schools – in Russia, the Czech lands, Serbia, and Romania. Upon their return, they became mainly teachers and thus gave birth to the Bulgarian female educated elite. They were active in the ongoing debate on the women’s right to study, participated in public life through women’s societies, created and maintained new girls’ schools; translated and wrote articles and books. (Ekaterina Karavelova)

In 1863, American missionaries established in Stara Zagora a female school where girls from Stara Zagora, Sliven, Svishtov, Rousse and Bansko were gathered to train. The aim of the Americans was to educate future mothers, tutors of nation and potential teachers.

According to the Tarnovo Constitution (1879), primary education in Bulgaria compulsory, accessible and free of charge for all children, regardless of their gender. The democratic base of the education system became a prerequisite for increasing the literacy of women.

After the Liberation, state secondary girls’ schools were established. The Bulgarian authorities (1895-1904) equalized the girls’ and men’s secondary curricula, made it equally accessible and gave the same rights after graduation. The number of state girls’ high schools increased up to 12 (1879-1930), the number of high school students to 15 154 (1930). Girls also studied in state mixed high schools and girls’ pedagogical schools. Not a few girls preferred arts schools: of Fine arts (est. 1896) and of Music (est. 1912). 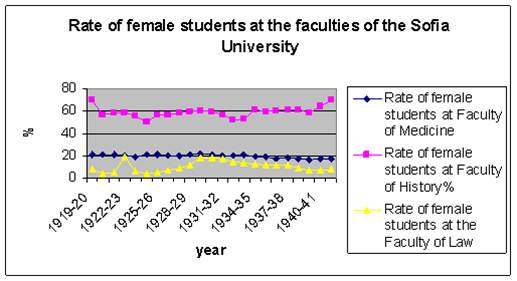 Since the beginning of the 20th century, vocational girls’ schools (agricultural, craft, trade, business, etc.) had been popular. They were established by women’s societies, municipalities, private foundations and individuals. They gave a profession to women who did not want to study higher education, as well as to future housewives and mothers.

Some wealthy families sent their daughters to foreign secondary schools, familiar with the good quality of education and its strict discipline as the French (Catholic) colleges in Sofia, Plovdiv and Rousse, the American (Protestant) colleges in Samokov, Sofia, Lovetch and Istanbul, the German (Deutsche Schule) and the Italian high schools. (Elizabeth Clarke)

After 1878 a Bulgarian state did not create obstacles for Bulgarians to study at foreign universities at their own expenses or with scholarships. Preferred countries were Germany, France, Austria, Switzerland, Yugoslavia, Belgium, and Czechoslovakia. The most popular specialties were medicine, pharmacy and dentistry, music, humanities, foreign languages and architecture. (Tota Venkova)

The Sofia University was opened for students all their faculties and majors, and only during the so called University crisis (1908-1909) deprived of student rights. After 1919, gender quotas were introduced, restricting women’s access to enroll freely in the fields of Law, Veterinary Medicine, Agronomy and Forestry, Theology, Physics and Mathematics. In 1940-1944 restrictions on the admission of the Jews were introduced with the anti-Semitic Law for the Protection of the Nation.